Have no plans April 31-May 2? Well run, walk, or crawl over to Penguicon in Troy, MI. Elder Signs Press will be manning a booth, selling the best dark fiction this side of R'leyh. If you're lucky, you might score a supremely cool Cthulhu Balloon Hat. 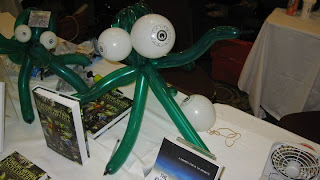 And speaking of insanity, writers and editors for ESP such as Stewart Sternberg, Christine Purcell, and myself will be chewing the scenery on several panels.
Posted by Charles P. Zaglanis at 3:54 AM No comments: 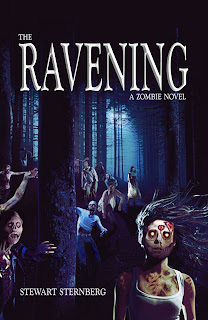 I was recently given the opportunity to edit Stewart Sternberg's first novel with ESP. I'm sure that the strong characterizations and themes will appeal to all fans of dark fiction as well as the diehard post-apocalyptic/survival horror junkie.
Posted by Charles P. Zaglanis at 5:23 AM 5 comments:

Cons are always over too soon. There are few times in this world where someone like me can stroll into a building and KNOW that the majority of men and women there are my people in the truest sense of the word. At any given moment you can learn strange and interesting facts, such as: Romans know how to dance their asses off to some cool jams, stormtroopers doing "The Robot" during a battle of the Rock Bands are both surreal and hilarious, and there is never enough space in the dealers' room.


Granted, I saw some things that should constitute crimes against humanity in any sane universe, but that aside, I enjoyed every moment I was there with good friends old and new.
Posted by Charles P. Zaglanis at 5:03 AM 2 comments: 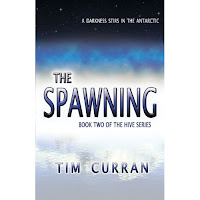 Hidden away in the shadows of glacial caves, a malevolent intelligence that not only threatens the lives of those who discover it but also the future of the human race, lies waiting. Despite the dire warnings from the researchers at Polar Clime, the National Science Foundation refuses to intervene, leaving the inhabitants alone in preventing a final war for the very existence of humanity. In this riveting science fiction thriller, the unforgiving landscape of the Antarctic is explored, revealing the darkest place on Earth and the unknown menace that dwells beneath its ice.
Posted by Charles P. Zaglanis at 12:50 AM 3 comments:

I seem to have neglected my blog somewhat. I’ll be posting a bit in the next few entries about the projects I’m working on.

Today, I’m going to share a scene from my short story “Cornucopia Rex.” I was asked to submit a story for a near-future lovecraftian anthology. The editor was looking for something very dark and edgy. The protaganist of this piece is a broken soul. A soldier who encountered something in Iran so far beyond human experience, it ruined her ability to cope with normal society. In the following scene, she’s waiting for a freelance computer hacker to finish downloading damning evidence from a multinational conglomerate she has a personal vendetta against. I hope you enjoy it.

Putting her gloved hands on the back of Eric’s chair as she leaned over his shoulder to view the monitor, Sheila said, “That was pretty damn fast. Figured you’d be at it for hours.” The blond tresses from her wig hung past her shoulders

“You get what you pay for.” Sweat beaded on the fat cowboy’s brow and his hands shook just a little. He smiled but shouldn’t have, it looked forced and sickly.

Twelve hundred facilities in over eighty nations. Finally, someone was going to give them the finger in a very big way. Finally she’d get some payback for what they’d done to her squad.
“Your codes only get us safely into the Cornucopia Project. I’m not going for anything else.” Finding the folder, he began downloading it. “If you want more, we’ll have to renegotiate and to be honest…” He hesitated.

“Are you scared?” Sheila asked, her hands leaving the chair. She could smell the fear on him, oozing out with his sweat. He’d probably take it out on his wife and kids tonight. Reading what was known about him made her sick.

“Yeah, I am.” Eric’s grin faded away as his voice became terse. “I knew a couple of sneaky bastards who tried to crack Blackmoore’s systems. Real aces. They disappeared and bad shit happened to their families. These guys don’t go running to the feds. Their engagement protocols are beyond black. Yeah, I’m scared.”

Sheila snorted at the confession and immediately wished she hadn’t. She forgot sometimes that most people fear death. They hadn’t walked in her boots. Hadn’t learned that death was the least of evils waiting in the dark. In the reflection from the monitor, she watched Eric’s lip twitch as his eyes narrowed. She may as well have told him he had a tiny dick. A tirade was on the way.
“You know what? Fuck you bitch. Even with the codes, you need a guy with my chops to get past security. These goons would have boots outside your door in less than ten minutes if you tried this. You and all your angry tree-hugging friends would get black-bagged and slabbed.

You think I didn’t do my homework first? Just ‘cause I need the money doesn’t mean I’m stupid. I’ve seen Monkeywrench making the news: CEO’s gunned down with their families, labs blown to hell.

And I know you too bitch, I know you real well. Three tours of Tehran, booted out when your squad got killed and you lost your shit. Started joining all those ‘animals over people’ groups. Old man couldn’t take your crazy ass anymore so he filed for divorce, then you really went gung ho for this shi..” Eric white-knuckled the arms of the chair as he pushed forward to shove his bulk to his feet. Sheila thrust the blade just beneath the base of Eric’s skull, severing the spinal cord. 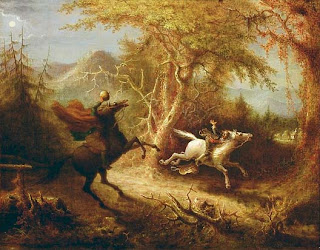 I love October. The air is that perfect sleeping temperature. Darkness reigns long, but not so long it causes depression. The breeze holds the promise of change..and just the slightest taste of decay. And I love Halloween most of all.
Christmas is nice, but has become so stressful. My birthday is fine, but there's a reaper pointing at a watch every time it rolls around.
All Hallow's Eve though, is magic. Kids love it, adults love it, no stress and all joy. No need to even decorate, throw some candy in a bucket and you're part of the fun.
I was always Zorro or Darth Vader growing up, both my heroes and villains had to be guys dressed in black swinging a sword around (I'm partial to ninjas as well). These days I'm too big around the gut to do them justice, but I do fine as a shambling zombie. The picture above is my new wallpaper; it's The Headless Horseman Pursuing Ichabod Crane (1858) by John Quidor
Posted by Charles P. Zaglanis at 4:22 AM 6 comments: 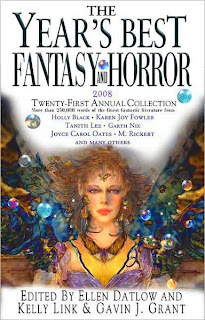 Stewart Sternberg and I had our names mentioned a couple of times in The Year's Best Fantasy and Horror. We were both given honorable mentions for our stories in High Seas Cthulhu. Other writers in the anthology whose work interested editor Ellen Datlow were: Matthew Baugh, Tim Curran, John Shire, and Lee Clark Zumpe. Congratulations to everyone involved.
Posted by Charles P. Zaglanis at 2:57 AM 4 comments: 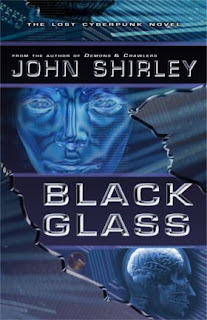 I recently copy edited John Shirley's latest cyberpunk novel Black Glass for Elder Signs Press. I haven't had a good dose of 'punk in a while and this one delivers the goods. Bleeding edge tech; a corrupt, dystopian society; balls-out, in your face attitude; and crisp, tear through the chapters writing.
Here's the back copy, for those interested in the storyline:
Taking the fall for his younger brother, Richard Candle went from being cyber cop to condemned criminal. After four years of UnMinding–, his mind suppressed, his body enslaved–he’s released to discover his brother has slipped back into the underworld of the V-Rat, the virtual reality addict.
Meanwhile, Candle’s harried by the murderous Grist, the head of the world’s biggest multinational. But his real enemy is something else: a conscious program, the Multisemblant, a meld of copied personalities, the dark side of five powerful people, with its own brutal agenda.
Human society is sinking ever deeper a mire of escapism–but Richard Candle, looking for his missing brother, fights his way through the real world of underground stock markets, flying guns, the trash-walled labyrinth of Rooftown and the fringe of the fringe….
Posted by Charles P. Zaglanis at 3:15 PM 1 comment:

I had a wonderful time at ConClave 33, both watching the other panelists and speaking on a few of my own. The RPG panel flew by, the Lovecraft panel was fun, but I really liked being on the zombie panel, it seemed to have the most give and take with the audience. Rick Moore astounded me with the skill evinced during his panels, I aspire to one day work a room like him, truly a marvel to behold. William Jones was informative and enjoyable to listen to as always, and Stewart Sternberg-taking the dais for the first time-was charismatic and knowledgeable.

The guiltiest pleasure, I must confess, was listening to the "writers widows" panel, in which Deborah Jones and two other writer's wives dished on the inner lives of their spouses. I cannot relate the sidesplittingly funny things revealed that evening because I was sworn to secrecy...well, actually, I was threatened with acts so heinous they bordered on crimes against humanity. Funny, funny stuff.

Kudos to Jody Harrow, Freon and the other unsung heroes behind the scenes who made this such a wonderful evening.
Posted by Charles P. Zaglanis at 2:55 AM 2 comments: